Why Elli AvrRam Did A Self Test For COVID-19 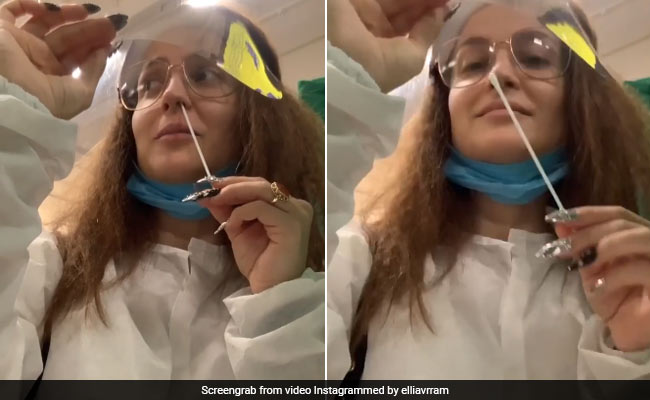 Elli AvrRam in stills from her video (courtesy elliavrram)

Elli AvrRam has landed in her home nation, Sweden. She then got herself tested for COVID-19 at the Stockholm airport. Though the test is not compulsory in the country, the actress did it because she would be meeting her family. Dressed in a PPE kit and a face shield, Elli took her own nasal swab. She recorded her self-test and to be honest we had mixed feelings. It was scary but super cute. “How do you do it at the airport in Stockholm? You do it yourself and only if you want to. Testing yourself is not compulsory in Sweden, but I wanted to do it, since I’m going home to my parents and grandma,” she wrote in the caption.

The Swedish-Greek actress must be really happy as she has finally reached her home sweet home. Just a few days back, Elli shared a post on Instagram saying, “Nothing like family.” Elli posted a picture where she could be seen face-timing her parents in Sweden. “Thank God for FaceTime. India -Sweden.” She tagged her brother Konstantin Avramidis, who clicked the picture.

Last year, Elli decided to spend the lockdown all alone with just her cat by her side. The actress told Hindustan Times that she had been coping well. She said, “I was in a serious conversation with my dad, who told me it’s better I don’t travel. There’s a connecting flight to Sweden, and what if they shut down airports? It would have been really chaotic.”

Talking about Elli’s work palate, she featured in the song Har Funn Maula alongside Aamir Khan. The song was shot in a cabaret set up and saw the actors set the dance floor on fire. The track is from the film, Koi Jaane Na, which was released on April 2. It is directed by Amin Hajee. Kunal Kapoor and Amyra Dastur are also part of the film.

Newspaper is your news, entertainment, music fashion website. We provide you with the latest breaking news and videos straight from the entertainment industry.